How do I cite a Twitter thread or conversation in my text and in my works-cited list?

A thread is a series of separately written but related tweets that are given a single URL. If you’re discussing the thread as a whole (rather than simply quoting an individual tweet in the thread), treat the thread as a collaborative work. As always, follow the MLA format template.

Follow the guidelines in the MLA Handbook: list the Twitter handles of the original tweet’s author and of any participants in the thread. Include real names, if known, in parentheses. If more than two people are involved, use “et al.”

Tweets lack formal titles. Most tweets begin with text and can be treated much like untitled poems, where the first line stands in for the title. Some tweets are composed only of images; as for any work in MLA style that lacks a title, you should thus substitute a description.

For Twitter threads, use the initial tweet in the thread as the basis for your title or description. Keep these three methods in mind as you determine what to list in the “Title of source” slot for a Twitter thread:

For a tweet under 140 characters, the MLA Handbook recommends listing the full text of the tweet as the title, as in the example above.

You can also truncate the titles of tweets—especially those that have over 140 characters or that include emojis—by using an ellipsis at the end:

Tweets with No Text 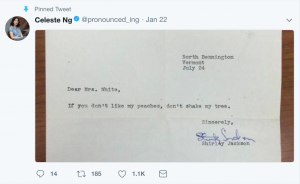 Title of Container, Date, and Location

When you are citing a thread, list Twitter as the title of the container, the date of the thread (or a date range if the thread continues over more than one day), and the URL:

As always, key your in-text citation to the first element of your works-cited-list entry:

Responses to Colson Whitehead’s snark-laden tweet on the term neoliberal were, by turns, funny, informational, dismissive of the term, and insistent on the term’s importance (@colsonwhitehead et al.).

Should commas be used around by and an author’s name after a title?

Do I cite a word or passage each time I quote it?

I am writing my thesis in British English. Can I still use MLA style?