If a Web site has a director rather than an author, should I organize my works-cited-list entry under the director’s name?

In general, you should list your entry for a Web site under the name of the creator. The creator may be an author, an editor, or a director. Many Web sites coin terms like “project lead” or “curator” to refer to the creator. The creator can also be a group of persons, an organization, or a government entity. You may need to consult an About page or a Credits page to determine the site’s creator.

For example, on the Credits page for Voice of the Shuttle, Alan Liu is listed as the director of the site: 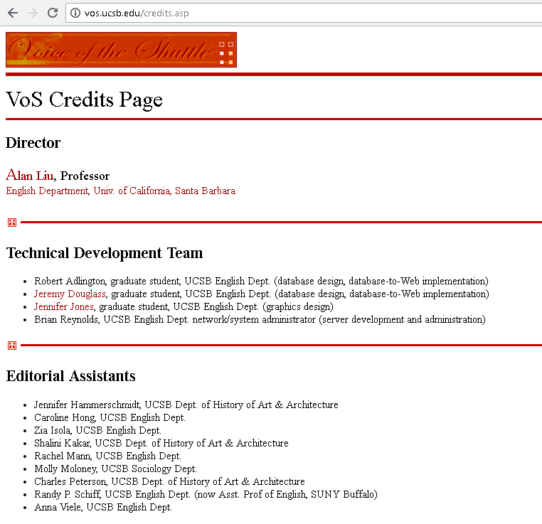 In your works-cited-list entry, you would list Liu in the “Author” slot.

But since Web sites are often collaborative works, you could also list the creator in the “Other contributors” slot:

If the site you are using does not provide any authorship information, start your entry with the Web site’s title.

How do I distinguish between different dictionary entries for the same term in my in-text citation?

How do I cite an interview conducted by e-mail?

How do I cite a serialized article?